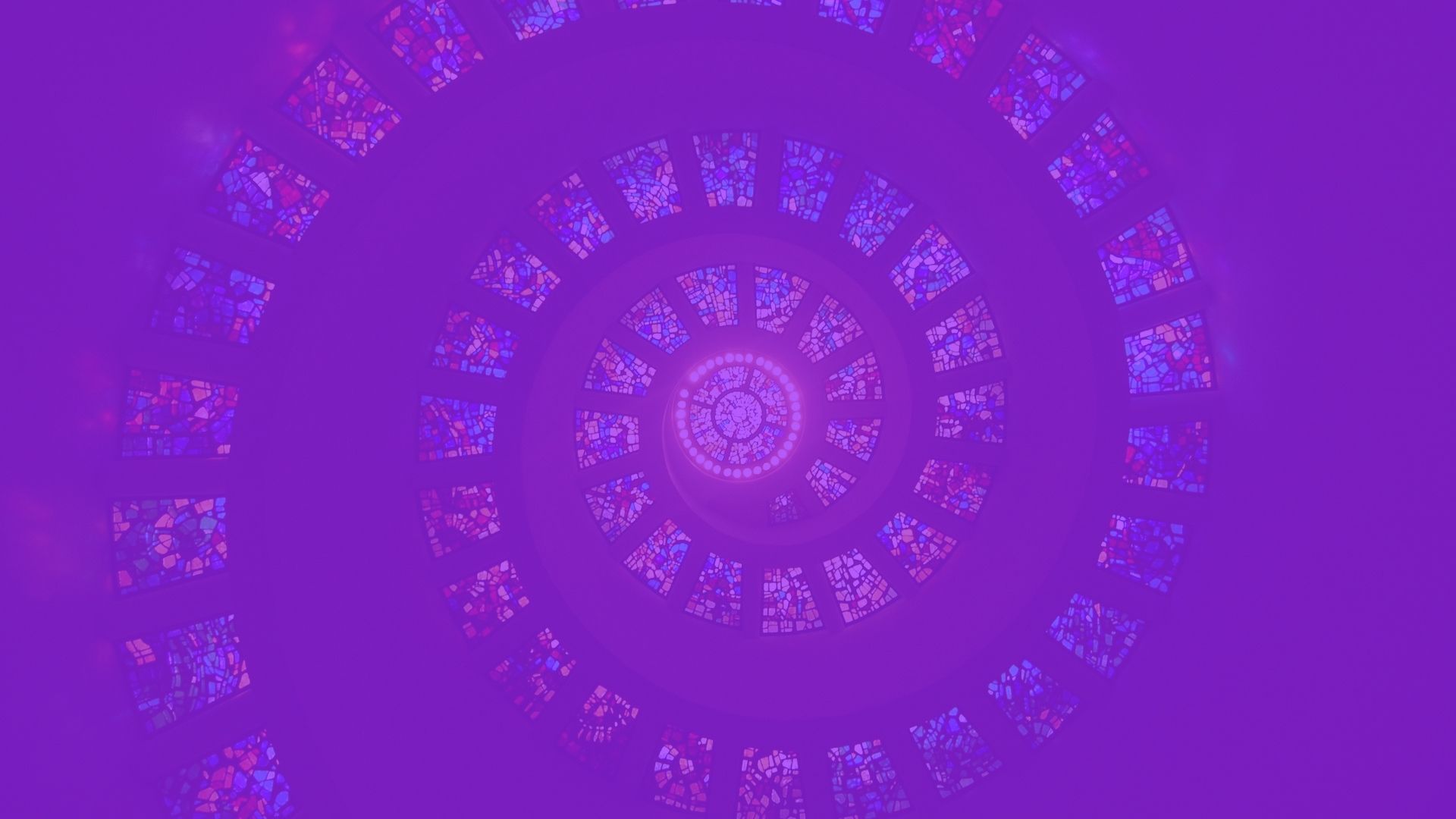 Component lifecycle is one of the most important concepts of React. Lifecycle methods give us a lot of possibilities to take control over the app updates and more!

The moment of the first render of the Component (inserting into the DOM) is called "mounting". It can happen only once in component lifecycle.

This lifecycle method will update the DOM when the state or props change.

This lifecycle method removes the component from the DOM.

How we can interact with lifecycle in React?

Currently, we have two different ways of interacting with React component lifecycle. For more traditional "class components", we can use specific methods ("componentDidMount", "componentDidUpdate", "componentWillUnmount" and few more).

On the other hand, since React 16.8, we have got hooks that give us a lot of new possibilities. All of the hooks are awesome, but in my opinion, the game changer is two core hooks - "useEffect" which hooks up the lifecycle to the "functional component" and "useState" which makes the functional component stateful.

To better understand the basics of lifecycle methods and see the differences between traditional React usage and more modern functional approach, we should discuss both.

I won't go too deep into the class lifecycle since this topic is already mature and well covered. Instead, I'll try to make a quick recap of the most important aspects.

React API exposes a few lifecycle methods for class components. The most important of these are componentDidMount, componentDidUpdate, componentWillUnmount.

On the diagram above you can see the most important lifecycle methods. To see all of the methods, please visit this cool diagram page

I hope you noticed that componentDidMount is called just after the constructor invocation and the first render. It means that the component is already applied to the DOM and you can interact with it. componentDidMount is a good place to set a subscription, timeout, interval or invoke an API request.

An update is caused by props or state changes. It goes with the following order

componentDidUpdate happens just after the component re-render. This method is not called to the first render. You should use this method to make a request, set a state, or operate on the DOM. Please do not forget to compare current and previous props/state to avoid an infinite loop.

componentWillUnmount() is invoked just before a component is unmounted. You should use this method to clean up necessary timers, and subscriptions or cancel network requests.

In this section, I will explain how the lifecycle works with the functional component. To understand the React hooks lifecycle, we will use a cool diagram inspired by donavon/hook-flow 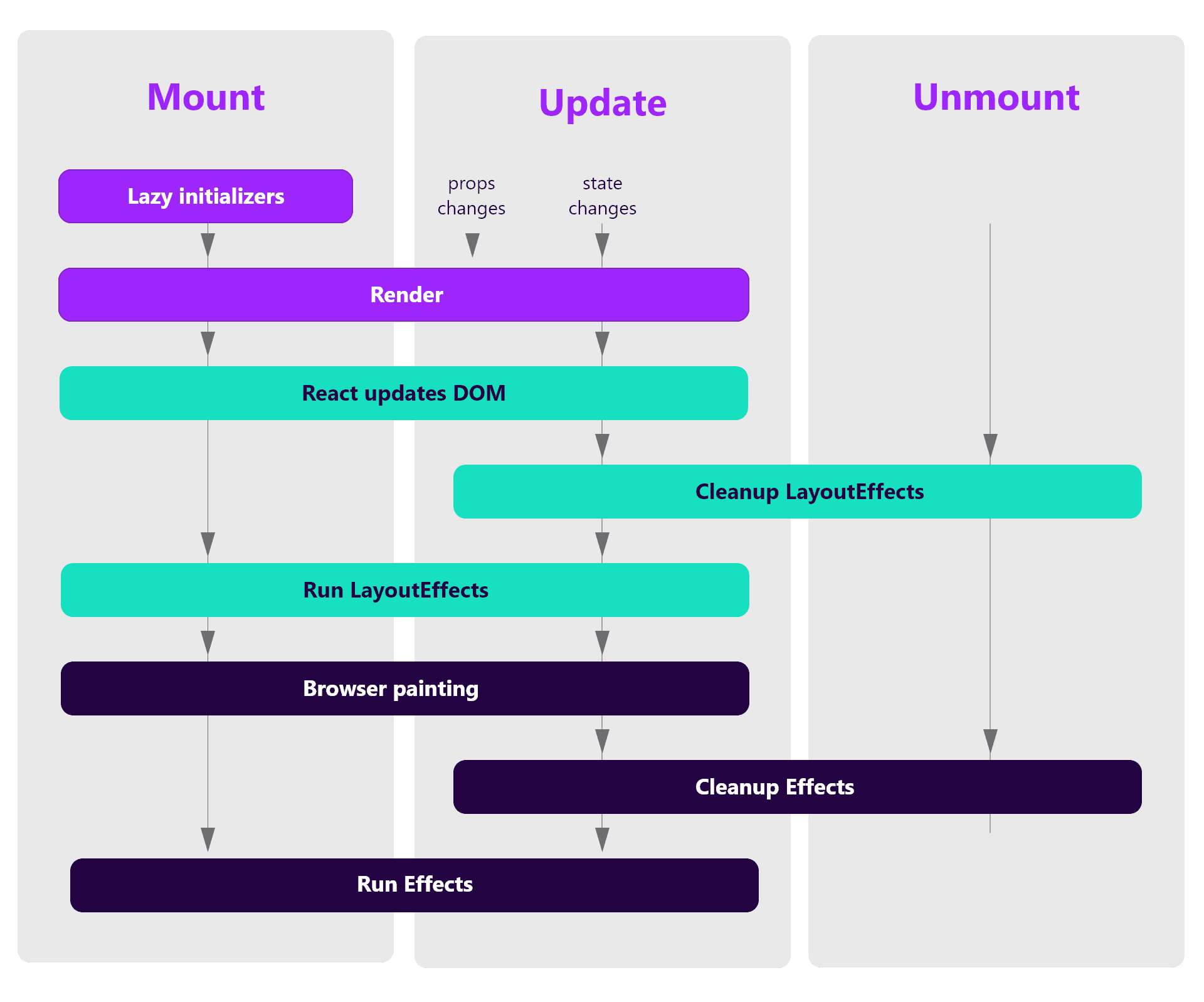 So, what happens here?

As you can see on the diagram above several things are happening in a specific order.

First goes lazy initializers, after that React does the first render and updates the DOM, then React runs LayoutEffects. The next activity is browser screen painting and after all, React run Effects.

At this moment We are ready to read from the DOM, trigger an API request, set interval, timeout, etc.

During each update, React starts from re-render caused by state or props change. There's no lazy initializers invocation.

Please notice that after rendering React clean up LayoutEffects to run these right after. The browser then draws the screen and after that React cleans up Effects and runs it just after.

The main difference between mounting and updating are:

During unmounting React is cleaning up all effects.

How to use React.useEffect hook? 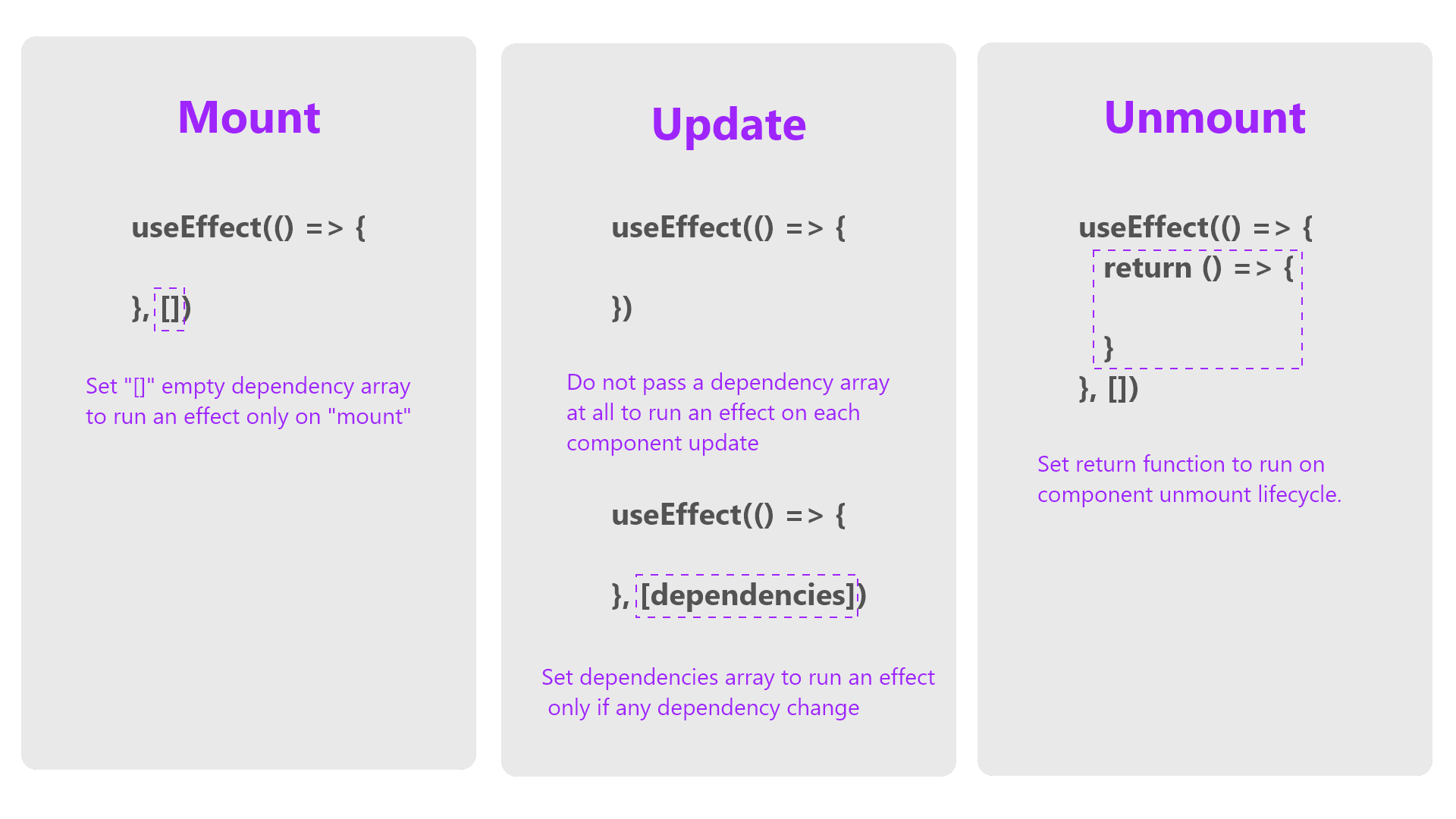 On the diagram above you can notice all about React.useEffect lifecycle. We can decide whether useEffect should be called on every component update, or only as a result of specific property/state changes.

Unmount - Clean this up

To clean up the subscriptions, API requests, intervals, etc, you need to return the callback function.

Be aware of running a cleanup function with "no dependency array" or with passed dependencies as a second argument. It will trigger the cleanup on dependencies change and might unsubscribe or remove your intervals etc.

If you return the callback function for hook with an empty dependency array, the cleanup will run only once during component unmounting.

To prove all of the theories We can take a look at a code snippet example.

In the code below I created the Parent and Child component. Parent component has

We expect to run all of it in the same order as seen on the hooks flow diagram above. There you can see the browser logs. 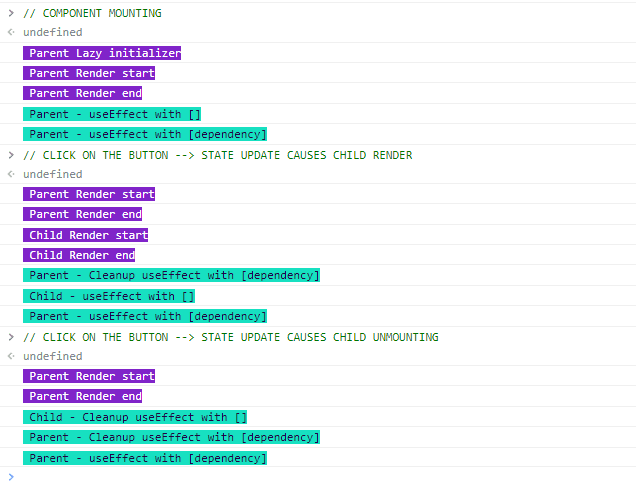 Everything was exactly as We expected.

I believe we now have a perfect understanding of the component lifecycle, both classes, and functions. The two approaches are completely different, but ultimately both give us similar possibilities. If you're wondering which option is better for you, I can say - "It depends, there are many pros and cons to both, but maybe we could compare them in another article?". Stay tuned.